I would first like to thank you for hosting myself and Mr. for 5 nights. We arrived with starry eyes, maybe we were tired, and we were overwhelmed at the airport. It is a monstrosity. I do applaud that we were in and out of customs and passport enforcement with quickness and ease. Upon moving through we were able to pick up our Thai SIM cards for our phones for a cool 600 Thai Bhat ($18 USD) that provided us with unlimited data and 100 minutes so we could ring each other if needed. Granted, once we were deeper into Bangkok we never needed to ring each other because we stuck together like glue. Not necessarily because of the heat (HOLY HOT), but because my husband wouldn't let me out of his sight because there was an overwhelming feeling that one of us would be lost to human traffic trade at any moment, or mugged.  It was actually a bit unnerving. Upon arrival to our hotel, The Shanghai Mansion in China Town, we were greeted by a very nice receptionist who welcomed up with some refreshing teas and cool towels. Upon check in an overzealous bellhop (more on him later) took us to our room. It was quaint but very comfortable. It was very pretty and authentic feeling. Mainly the air worked well and that is one of my top requirement in a hotel room. Well that and the doors cannot be on the outside of the hotel. I digress. 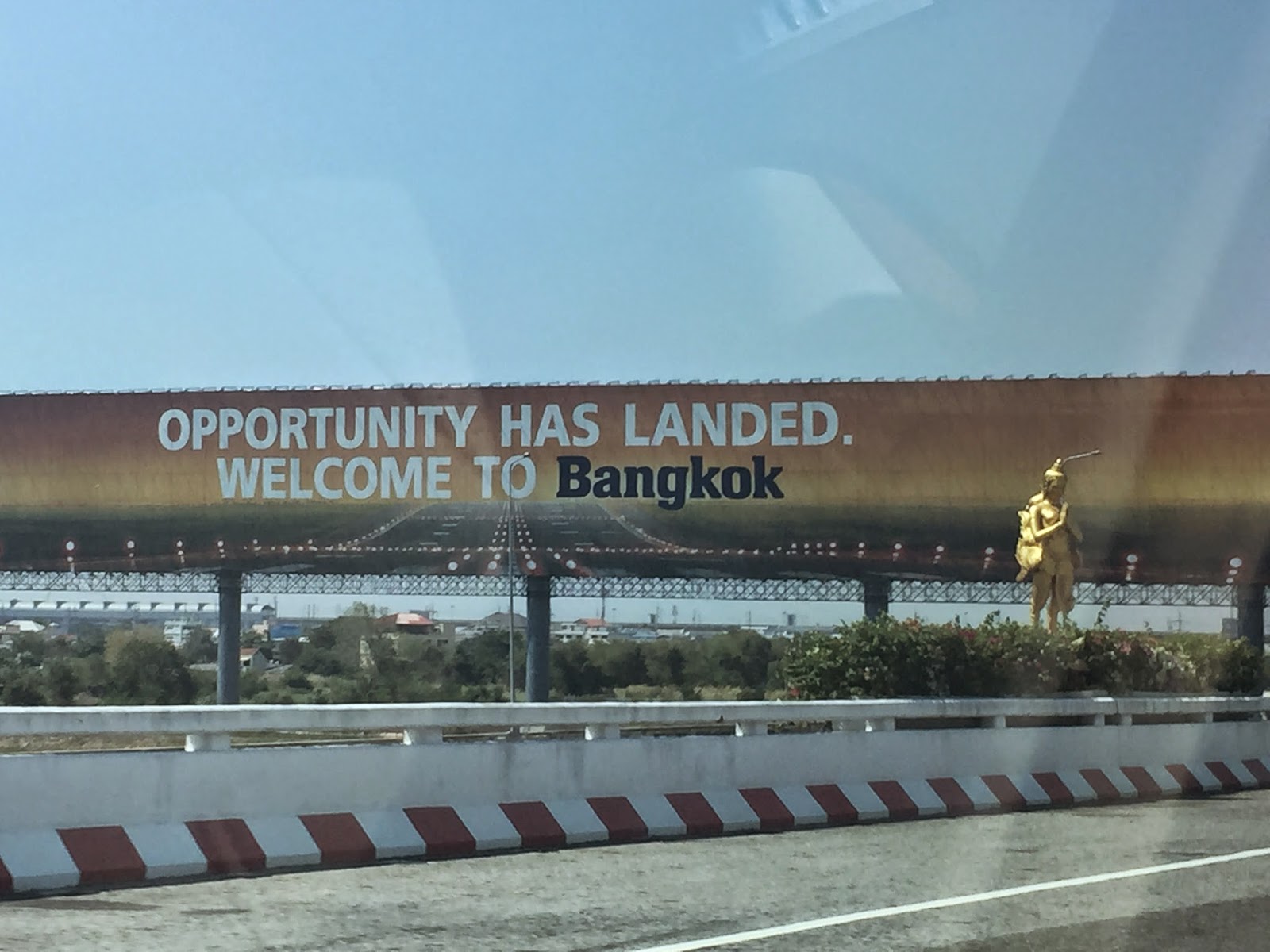 We took a short nap and then went down to explore a bit and the over zealous bellhop came right to our aid (HA!) and put us in a taxi to get us some food. The meal was great, but our bill, not so much. It was quite expensive. However, the fresh seafood and the amazing rice and noodles made it worth it after  long day of travel. We paid and were put into a TukTuk (see: the devils car) and we wanted to go back to the hotel. Now Thailand, I was excited for this TukTuk experience. I looked forward to the wind in my hair and seeing the city as it had come alive as the sunset. However, the TukTuk driver had other plans. He offered to take us around the city to a few "sights". Well I knew from friends that this was always to be refused because you end up in places that no self-respecting, or sober, person would ask to go. Well after arguing with the Tuk Tuk driver for a few minutes, getting out of the TukTuk and repeatedly refusing the "Ping Pong Show" (do yourself a favor and don't google that) we were back on our way through the city to our quaint little hotel. This left a bad taste in my mouth from the get go with public transportation in Bangkok. Perhaps it was the air pollution. Either way, not my favorite. We took a short stroll around, saw some sights, many street walkers (Human trafficking is real) and people eating in the middle of the road on chairs, we went back to our hotel. We enjoyed a cocktail on the patio, listened to a little live band and then called it a night. We were tired and it was sweltering. 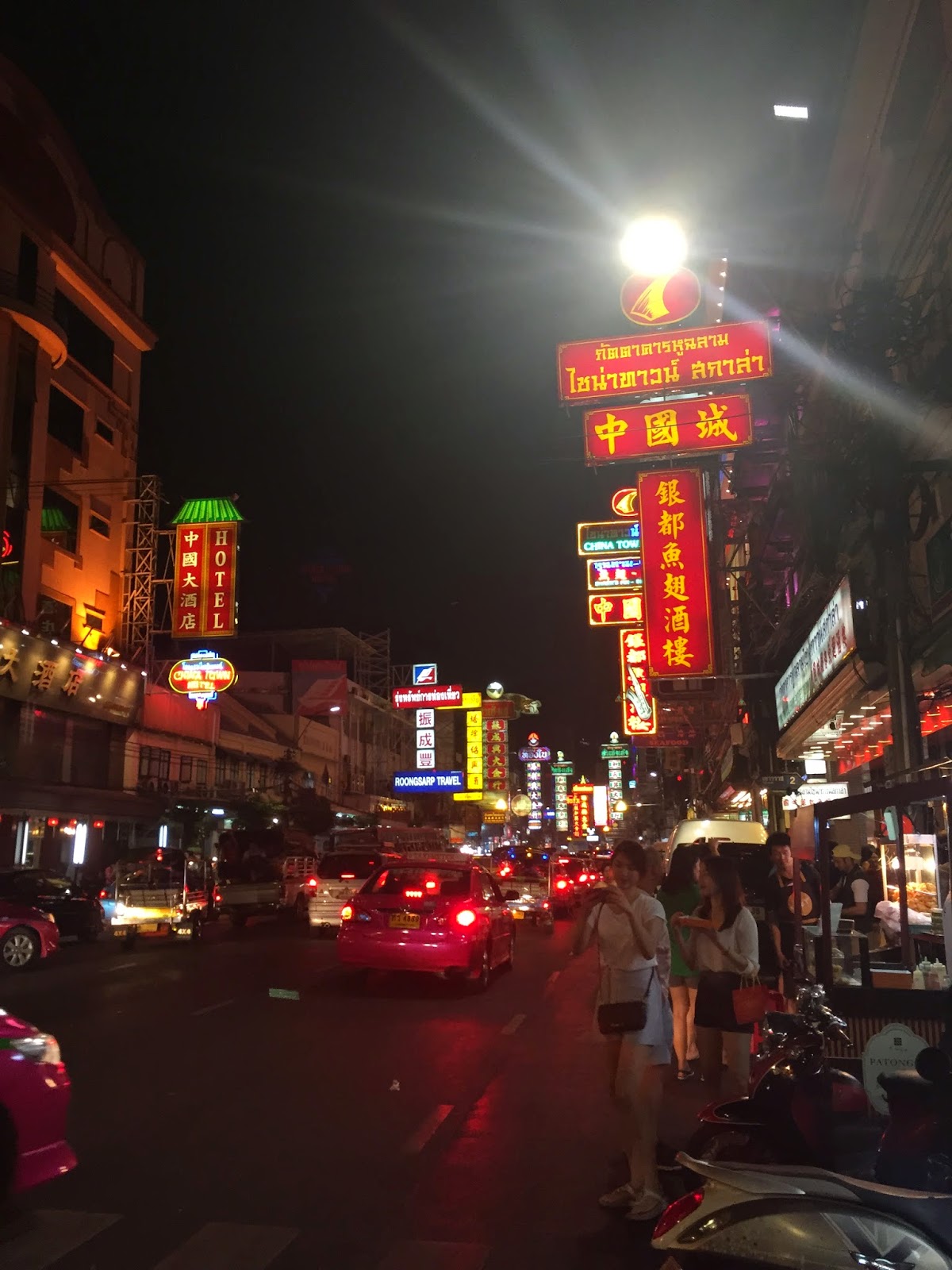 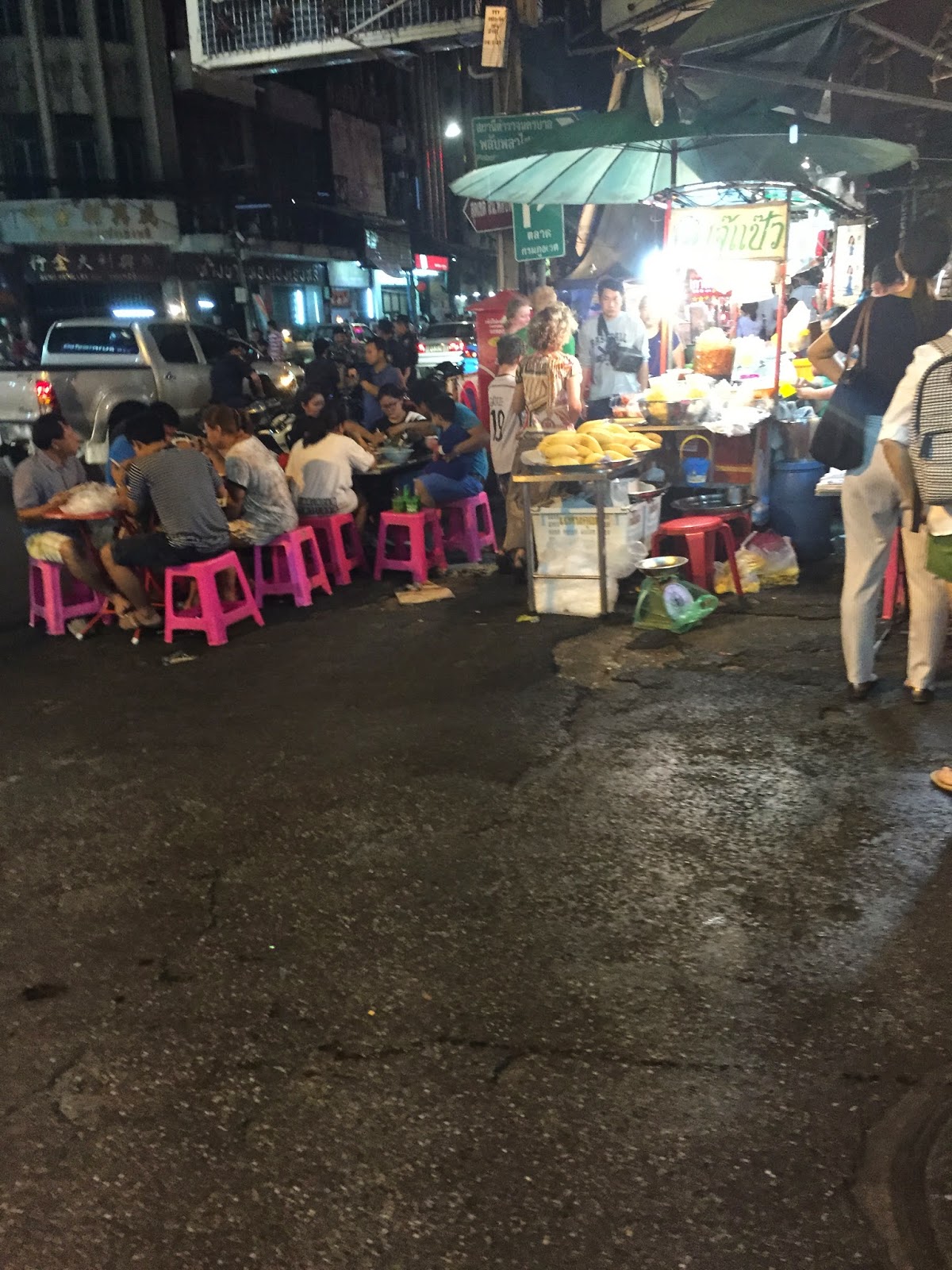 Day two was one for the books. I would say that this was the absolutely best day that you offered us. We went on an excursion outside the city with a rebooked company to take an ox cart ride, make traditional Thai food with a local at her home, visited a market, and wrapped up the day by riding an elephant through the jungle. When I say it was an unforgettable experience, I definitely mean that with every sense of the word. I will say that what made this trip the best was the tour guide, Peter. He was fantastic. So fantastic that I booked him for a private tour hosted by him for later in the week. Our day started super easy when Peter arrived at the hotel. We were on the tour with two other individuals and they were great. Peter first took us to one of your markets. I can say, Thailand, that I can do without your markets. There were pig heads, frogs, and other foul items scattered throughout. We couldn't get out of there quick enough. Peter then took us to a locals home where we did an ox cart ride and cooked traditional Thai food. Man it was spicy! After eating we took a very long ride through the winding roads in the mountains where wild elephants roam. I was carefully examining the woods but I never saw anything that resembled an elephant. We finally arrived at the park where we took our elephant ride through the jungle. A once in a lifetime opportunity that was something out of an episode of the Bachelor. It was beautiful and the elephant was awesome. It didn't dump me off so I was a fan. Thailand, did you know that elephants like bananas? I was also told that they loved peanuts but apparently they also prefer bananas as an after walk treat. This was by far the best adventure of the trip. 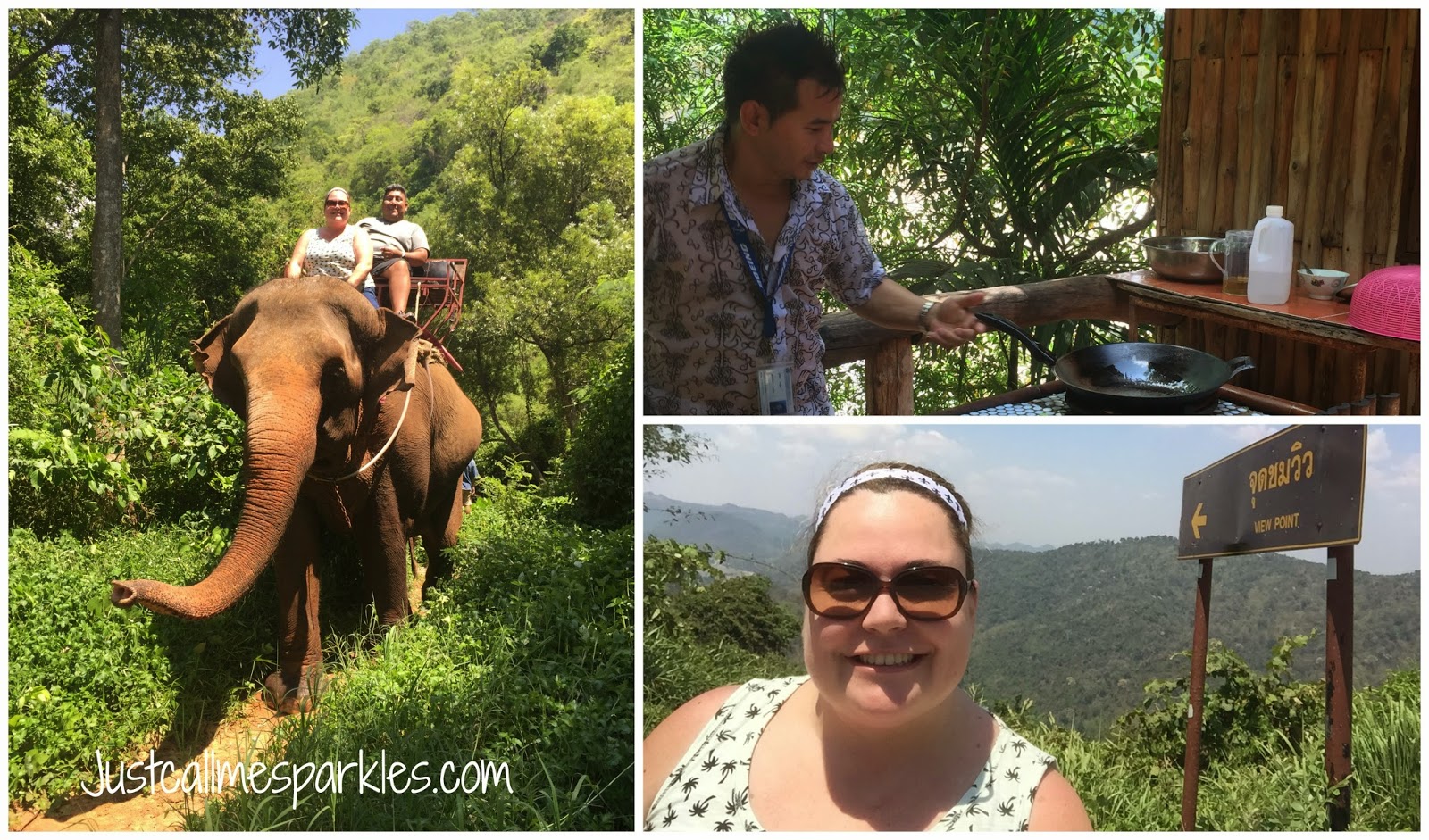 So to this point in the trip, Thailand, it was really 1-1. We had a poor experience with Mr. TukTuk and then an out of this world experience on our excursion. So on day three we were naturally on a high from Bangkok and our experience the day prior and we wanted to keep up the momentum. We wanted to visit the Dusit Zoo so I could feed the hippos. I found that on Instagram and I have to say that I was completely stoked about this. So we scooted past Mr. Zealous Bellhop at the hotel and tried to grab a taxi but he came running out to find us and ask where we were going, what we were doing. However, we had already decide that we were not trusting him any longer as he was obviously in cahoots with the taxis, restaurants, etc. Thailand, your secret is out there are many scams that are run on unsuspecting tourists every single minute. Even from those who you would normally trust on a trip, such as a representative from a hotel. So we walked for a bit and a guy told us we were in an area that was mainly shut down. I had a feeling it was another scam of yours Thailand but I am constantly told that I am too cautious and I need to not think everything is out to get me. Well Thailand, the next happenings pretty much solidified that Bangkok is the seediest, shadiest, city I will ever have the pleasure, or displeasure, of visiting.

So this "nice" guy says oh you're going to the zoo, well the green TukTuks are run through the city and the others are personally owned. So if you get in this one over here, you won't have issues. I was cautious but we tried it again. The TukTuk took us to the temple of the reclining Budda. It was cool architecture and nice talking to the local man inside. However, I think the whole claim the buddy is solid gold is a false claim. Granted, I didn't touch it but it didn't appear real. It looked painted but I am sure you will never tell the truth. So great, we saw a temple up close. It was pretty. So off we go on our Devil's Chariot and here comes the bullshit. The TukTuk driver starts saying lets go here, lets see this. I said, no, Zoo. He said I don't know where it is. I showed him on the map and he said oh no, too far. This bastard pulls over and drops us on the side of the road in the middle of a neighborhood that I don't think many would feel safe in. Thailand, what in the hell is wrong with your people? I mean seriously. After some frustration, we find a taxi and get to your zoo. It was much bigger than I anticipated with several animals and nice enclosures. Not necessarily the most stable enclosures, but enclosures nonetheless. I was so excited when we got to the hippo enclosure. However, Thailand, your hippos were not having it. They didn't move from their little pond. There was no food that could lure those fattys out of the water. #disappointed In true Thailand fashion, we couldn't get a taxi that would take us back to our hotel. We asked approximately eight cabs to take us and they all said no. Finally one would take us but not run the meter. We just agreed on a flat rate. Thailand, you've gotta do something about your transportation scheme. To put it lightly, it is complete bullshit. 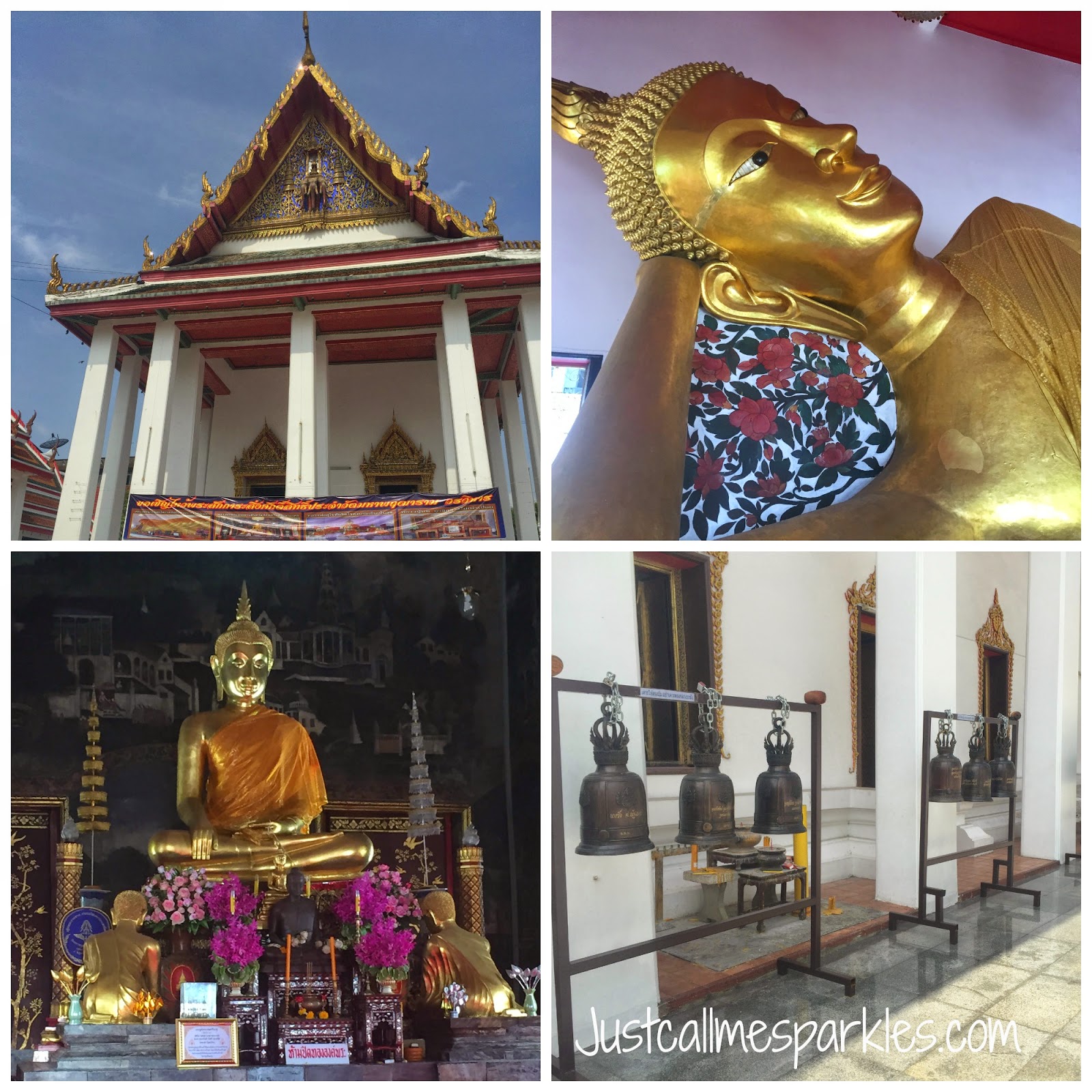 Our last day parading around your countryside, Thailand, was another enjoyable day... thankfully. Our tour guide took us all over and we were able to seamlessly see a temple that has trees growing on in the inside and covering the outside that is over 400 years old, a coconut sugar making hut, a beautiful orchid farm, and then on to your floating markets. While it was a pretty unique experience, the scams were alive and well as our boat driver took us only to certain shops along the water that he clearly had a previously arranged set up with the shop owners. Annoying. 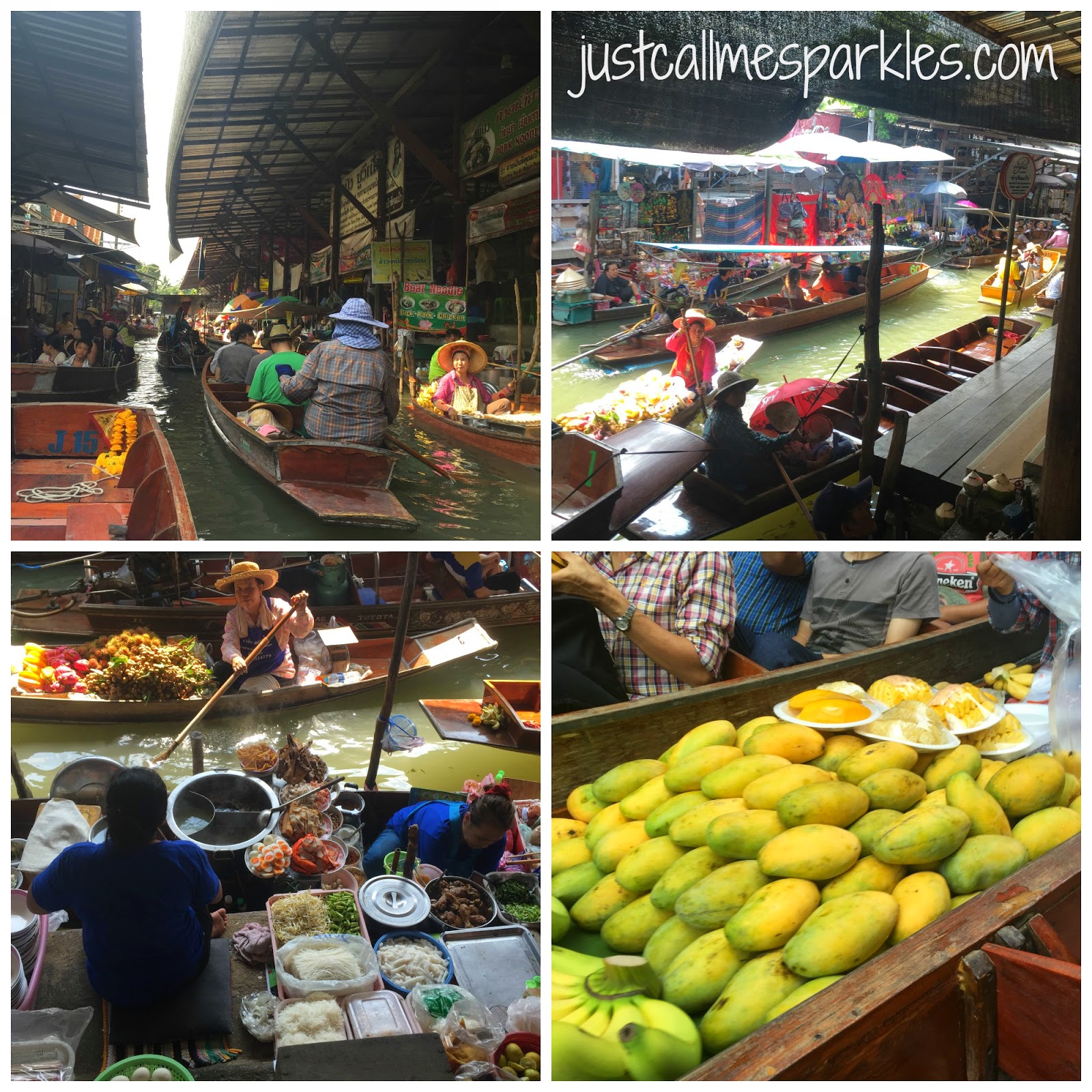 After the floating market adventure, we were taken to a tiger farm and another once in a lifetime opportunity was provided to us. We were able to play with a tiger and feed her. Her name was Lemon; I liked her a lot. She also liked me - she didn't eat my face off. Lemon is also a comedian as she made some hilarious faces for the camera. 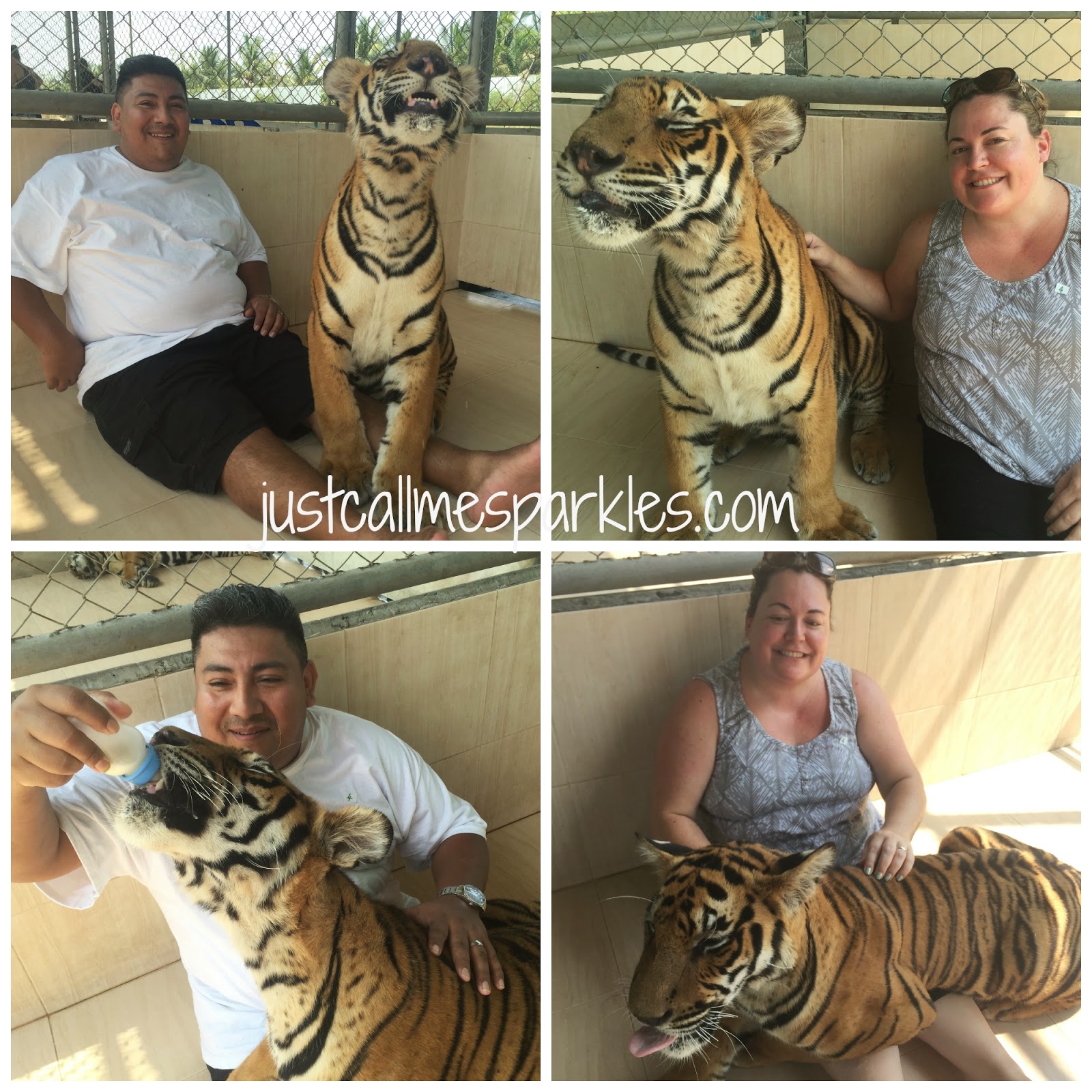 We also went to an elephant show where they played soccer and then to a crocodile wrestling show. Another win with our fantastic tour guide and for the animals of Bangkok. Thank goodness for our tour guide Thailand because he saved our overall view of the country and made our trip with some positive experiences. I would use him again if we ever go back to Bangkok. Which, for the record, we won't. 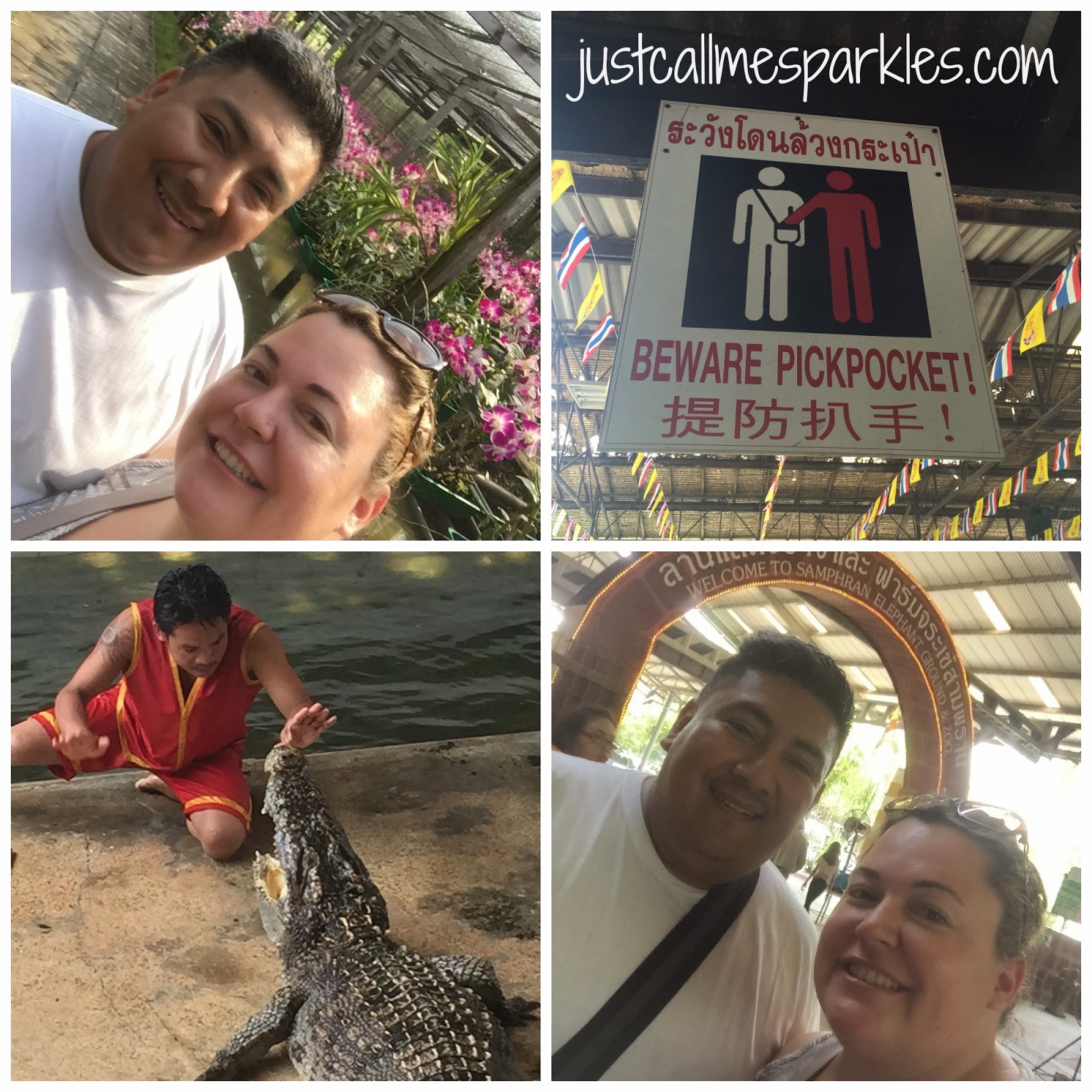 Overall Thailand, I was only mildly impressed with the country, granted we only saw a portion of it. The city of Bangkok, it runs unparalleled in the realm of filth. I would rather sit on any street in NYC and eat off the sidewalk. It was pretty revolting. It smelled awful, was crawling with street walkers that are in no way discreet, and feels completely unsafe. When you are told constantly to watch your belongings, don't leave your stuff anywhere, and you are just waiting to walk into the next scam - I cross it off my travel list. I won't visit your city of Bangkok again. At least, not willingly. Thailand, I would encourage you to clean up your act, your city, and your people. It is a shame that a city with so much potential is being ruined buy its own.

But hey.. thanks for the elephants. They were my favorite. 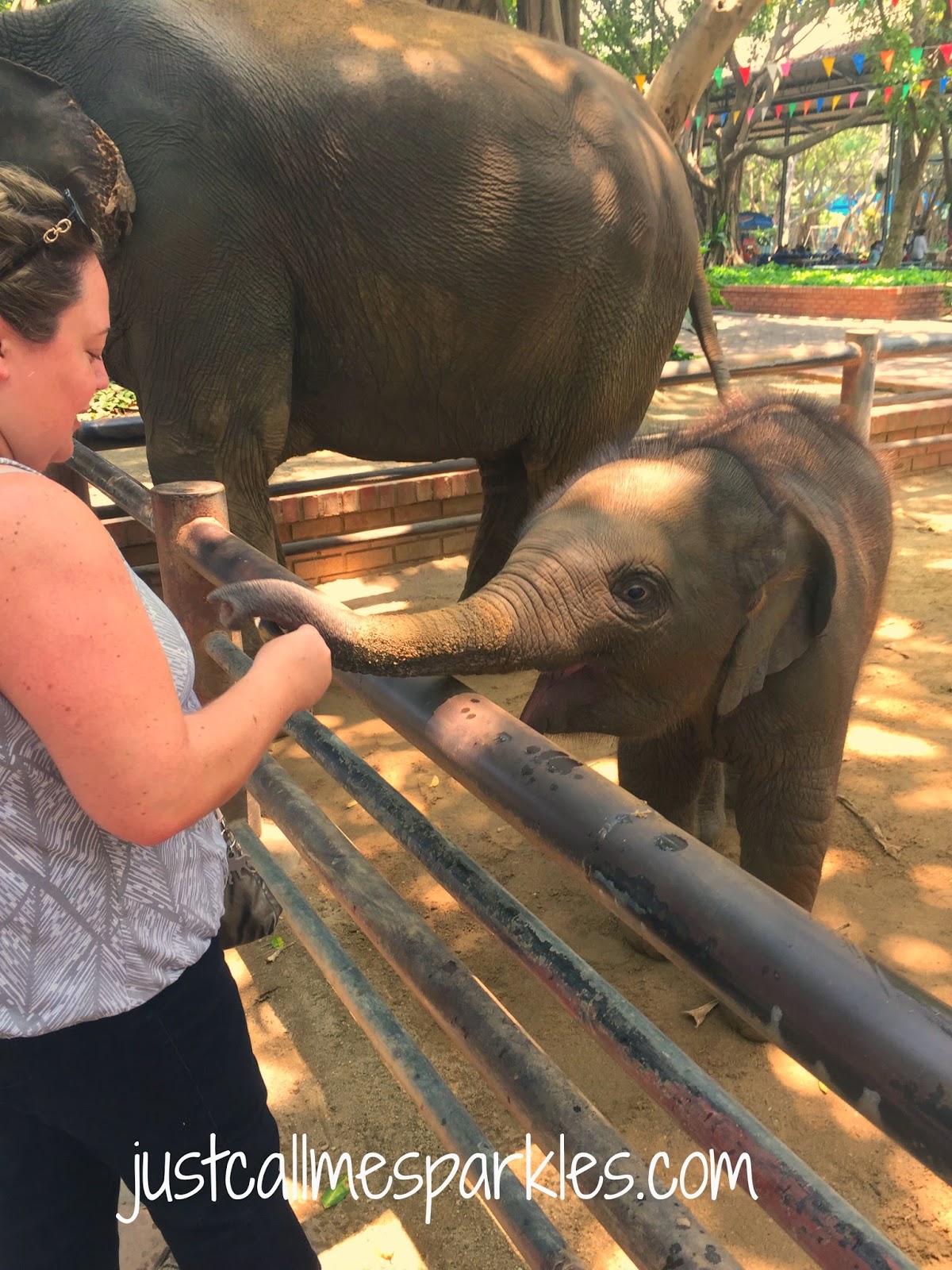